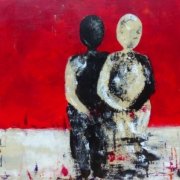 I can’t breathe either.

A link forged at 16 years of pure friendship: meeting my friend, Meryanne Loum-Martin, the sister I dreamed of, present but not sticky, lively and sensitive, ambitious and loving, energetic and ethical. We live in different countries now, caught up in our lives. But if one has happiness or sorrow, it is with the other that she shares it. My sister is Franco-Senegalese, American by her marriage.

My first love, Mono, wonderful, a student like me in Aix en Provence in the 75’s, was from a large Moroccan family, and the way he was treated at the prefecture when he had his papers drawn up, disgusted me. It made him smile, but not me.

My Haitian friend, Muriel, also a student, was as beautiful as she was fragile, and racist jokes, around a meeting in a lecture hall, made me feel more than a little uncomfortable. Breathless, not being able to breathe We were getting upset together…

Some time later, a dinner at the home of some “so nice” and violently anti-Semitic people, which I ruined, by standing up and explaining to them that I was at least “Jewish honoris causa”. Like Christ, by the way!

In Marseille, one year later, we were walking on a sunny spring day in the city, I was 23 years old. With another friend, Marie G., in front of us ran her three year old son, full of joy, adorable. Two ladies exclaimed: “And to think that this charming “negro”, is going to become an awful big black man”. I can’t breathe. We stayed, his mother and I, coitus of stupor.

It was a reality of 80s France.

Then the angles became more rounded, the nasty words shocked, became almost inaudible, our lives evolved, together. At least I thought so.

I don’t see any more problems. Living in a caring, educated, international environment, I didn’t want to see them.

Why am I telling you this, today, me a white woman, born in France? In whose name?

You see, my family and my relatives, they are the ones who are no longer breathing today!

I spent a long time in the United States, around the year 2000, working for IBM, a company in which the tradition of equal opportunity and non-discrimination was not an empty word (Letter J.Watson 1953). Structured and quantifiable diversity policy, particularly with regard to women, but also for all affiliations: “races”, cultures, sexual orientations.

And despite all this, there were still long discussions in NYC with my black executive friends about the comparative importance of being a woman and being black, the hierarchy of affiliations in the land of the American dream. I heard it, without fully grasping the subtleties of the debate, but I am becoming more aware of it now that the Black lives matter movement is taking place.

Finally, are you telling me again, my legitimacy to stand up and carry my voice? It comes from afar. It was a long time ago.

It’s a family history, ambiguous, like that of all families.

It goes back to a Jean Baptiste La Fonta, Royal Councillor in 1746 who had, I believe, nine children: one: Philibert went to the United States and lived in Louisiana, Jean Hilaire went to Martinique, perhaps Cuba, and died there in 1854. And finally two other brothers, Jean and Jean-Baptiste, emigrated to Santo Domingo.

These two brothers, born in the southwest of France, went to cultivate land in Santo Domingo. They founded families there, died and were buried there. And their children and their descendants continued to bear the name La Fonta, which became Lafonta.

At one point, my ancestors, my cousins left Santo Domingo. By complicated paths, they landed, notably in Louisiana, New Orleans, where they immigrated permanently, taking on all the available and difficult jobs to become American citizens: the LaFonta’s of New Orleans, among others.

We are in the 1930s and 40s, and it’s easy to imagine that it was not easy to be a black American, a recent immigrant, and to be called LaFonta in a country where slavery was abolished on December 18, 1865. In Louisiana, where the plantations are watching, like witnesses to this painful history.

In my family in France, we are a bit curious, but not too curious about this branch of the family.

You can imagine in the landscape of the time, the great wars, decolonization.

All the more cautious as these journeys, to the islands and the New World, are often linked in some families in the southwest to triangular and other trades, and therefore, in our same family, the past may have been heavy to carry. And complicated to reveal.

My father, born at the beginning of the 20th century, wanted to know, anyway!  He loved jazz, but preferred his daughter to marry a white man. With his certainties, he wrote a letter to the consul in New Orleans on his manual typewriter, to know how to contact these unknown Lafonta. He never got an answer and was annoyed. Years later, I would learn that his letter had been read, but that the American Lafonta were not, at that time, too eager to reconnect with the white La Fonta family.

And yet these lands in Cuba and Santo Domingo cradled my childhood with lost dreams.

Then, around the year 2000, the world became accessible for and by everyone, thanks to the Internet. No more family secrets! Or almost.

This is how my cousin Juan LaFonta and his sister Dana arrived in France in 2013, at my home in Paris…

And when I opened the door of my home to welcome them, these people I knew nothing about, I knew instantly that I had just completed my family.

In an instant, to feel that we are so close, without knowing anything about each other, with so many differences, but also a natural and deep intimacy that we don’t need to say anything to each other, and also the desire to spend hours together sharing everything and exchanging a thousand stories and a thousand details. Dazzled by happiness.

So, here is my answer, my family is black and white.

Juan LaFonta, his family, his father George LaFonta, are my family.

Juan is younger than me. He’s a litigator in New Orleans. He was elected to the State House of Representatives in 2005. Among other things. Like me, he likes people, partying, meeting people, helping people, sharing.

When I’m sick, Juan comes to Paris from the States right away.

In 2015, when I became a paraplegic after an operating accident, Juan came to spend a few days in Paris, just to celebrate my birthday.

When I was able to stand up in the spring of 2017, with my husband and one of our daughters, we flew to New Orleans. Which we discovered with Juan.

I met his parents, his mother Joanna and his father George.

And in George’s arms, I felt the love that unites us across the centuries, “races” and continents.

George had a letter for me, the one that my father had written 20 years earlier to the consul in New Orleans, which George had received but did not wish to follow up on. He passed it on to his son who then found me in 2013.

Walking with Juan in Nola is an amazing experience. Already, at the airport, we could see his face on huge billboards: next to his photo was his telephone number to contact him, especially for any racial or community problems. Lawyer in the United States, a very American and committed profession.

And on the tram or in the street, Juan, who is recognized in his community notably by commercial video clips that have toured America – up to Ellen de Generes’ show -, Juan is celebrated, contacted, congratulated, admired. And he loves people so much. It chats, exchanges and lives. Warmly.

So when I regularly see in the news all this succession of exactions towards black citizens, American or of other nationalities, even French citizens, it is me who is attacked again and again and even more, from now on. Black and white lives matter.

And Juan’s grief is mine, his rage too! Today, in our family, no one is breathing.

And George Floyd’s shattered life fills me with tears. He could be my George LaFonta, or Juan, or Dana.

A week ago Juan called me, sad and hurt. He wanted my opinion on video messages, in preparation, which he is contributing for his community, but also for all American citizens fighting for the Black lives matter movement, regardless of their race, gender, or beliefs.

To say loud and clear: we are here to make sure that this doesn’t happen again and to build together a fairer world. A world where, in family or not, everyone breathes freely. Black lives matter – All lives matter

Gratitude to Thais Martin for brushing my english

These cookies are strictly necessary to provide you with services available through our website and to use some of its features.

Because these cookies are strictly necessary to deliver the website, refuseing them will have impact how our site functions. You always can block or delete cookies by changing your browser settings and force blocking all cookies on this website. But this will always prompt you to accept/refuse cookies when revisiting our site.

We fully respect if you want to refuse cookies but to avoid asking you again and again kindly allow us to store a cookie for that. You are free to opt out any time or opt in for other cookies to get a better experience. If you refuse cookies we will remove all set cookies in our domain.

We provide you with a list of stored cookies on your computer in our domain so you can check what we stored. Due to security reasons we are not able to show or modify cookies from other domains. You can check these in your browser security settings.

We also use different external services like Google Webfonts, Google Maps, and external Video providers. Since these providers may collect personal data like your IP address we allow you to block them here. Please be aware that this might heavily reduce the functionality and appearance of our site. Changes will take effect once you reload the page.